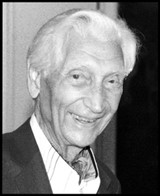 Prof. Rohen headed Chair 1 of the Erlangen Institute from 1974 to 1991. His teaching was characterised by his functional view of the structures of the human organism, in which generations of medical and dental students in Erlangen were able to participate. Scientifically, he developed fundamental new insights into the structure of the larynx and the functional morphology of the eye and enjoyed international recognition for this. He was significantly involved in the development of the first glaucoma operations. As emeritus professor, he was always closely connected to the Institute and was scientifically active until his 90th birthday.

The anatomists working with him in Erlangen remember the time with him with great gratitude and will cherish and continue to live his personality as well as his joy and passion for the people in the Institute and for science.

The Anatomical Society will honour his memory.

Herbert Lippert was born on 28 July 1930 in Bohemia and attended school in Karlsbad. In September 1945, the family fled to Rosenheim, where he passed the Abitur in 1948. From 1948 to 1953, Herbert Lippert studied medicine and obtained his doctorate (Dr. med.). During his compulsory assistantship in various clinics, he studied psychology, graduating with the degree Dipl. phys. and a doctorate in philology (Dr. phil.). As early as 1966 he accepted a call to the newly founded Hanover Medical School, where he headed the Institute of Functional and Applied Anatomy from 1968 to 1992.

Herbert Lippert organised the Anatomical Assembly in Hanover in 1978, was on the board of the Anatomical Society in 1982-1985 and was congress president in Bochum in 1984. He was known nationwide especially for his textbooks of anatomy geared to the clinic.

The Anatomical Society will honour the memory of Herbert Lippert.